You will find below a synthesis of the main organs targeted during a DETOX cure.

There are 2 categories of waste that can harm the body; and there are 5 organs that can eliminate them (detox organs or emunctories) which will be discussed in this article.

Two types of toxins that can pollute the body

Before starting the subject on the organs of elimination of toxins by which the body gets rid of its waste, it is necessary to know first the 2 types of waste which can clog the body, which are "the glues" and "the crystals".

The biologist Pierre Valentin Marchesseau (1911-1994), the propagator of naturopathy in France, classified the body's toxins into "glues" and "crystals". According to him and his followers, the first of whom was probably Hippocrates (420-370 BC), the father of modern medicine, this disease is due to the clogging of the liquids that circulate in the human body (blood, lymph, intracellular, liquid and extra).

These liquids constitute what is called "terrain". When there is a degradation of the terrain caused by organic fouling, there is a loss of physical and psychic health.

Where do "glues" come from?

Glues have no definite form, as they are soft, viscous, sticky, elastic, rounded substances and can be more or less thick.

Although they are not aggressive to body tissues, their mass and thickness can hinder the circulation of various liquids in the body (blood, lymph, intra or extra cellular liquid), or even block blood vessels.

There are also glues that can obstruct the respiratory tract, such as sputum, mucus and phlegm, which can be removed by blowing one's nose.

These glues are substances of lipidic origin, which means that they are due to fats (cholesterol, saturated fats), and of glucidic origin due to the residues of badly digested starch. They are also made up of dead cells (from cell renewal) and bacterial corpses (bacteria neutralised by the immune system).

Unlike glues, crystals have a structured form. They are aggressive and irritating to tissues, as they have a sharp and hard character. This can cause injury and inflammation (as in "gout" with its sodium urate crystals). An injury can be caused, when their contact is prolonged.

They are also present in the joints, which can also pile up, inflame them and then block them.

The waste in the body is classified into glues or crystals according to their size and their solubility or not in the liquid.

Glues, because of their size, cannot pass through many of the membranes that make up tissues, whereas crystals, being much smaller, can.

Crystals are soluble in a liquid, whereas glues are not because of their gelatinous constitution.

THE 5 ORGANS THAT ELIMINATE TOXINS

The 5 organs in charge of the elimination of toxins are also called organs of detox, or emunctory, or filter organs including the liver, intestines, lungs, kidneys and skin.

These are the organs that take care of the evacuation of glues and crystals from the body.

They first filter them from the blood that passes through them and then transform them via specific enzymes, and then evacuate them from the organism; hence the name "exit doors" of the body.

Each emunctory is capable of eliminating and treating one or the other of the 2 wastes, except for the skin, which is specialised in treating both.

There are therefore specific glue emunctories: the liver, the intestines and the lungs
Specific crystal emunctories: the kidneys
And a mixed emunctory (glues and crystals): the skin.
Each organ of the detox can be boosted during the cleansing work. This can be done with drainage tools, such as plants, vegetables and fruits with detoxifying properties, as well as sauna, baths, enemas, heat, massage, movement, etc.

The 3 specific organs for the elimination of glues: the liver, the intestines and the lungs
The liver is an organ located in the upper part of the abdominal cavity, under the diaphragm and protected by the rib cage.

It is possible to touch only a small part of its lower part. It is irrigated by 2 blood vessels. Oxygen-rich blood is brought to it by an artery which comes from the aorta, and a vein, the portal vein, brings it blood rich in nutrients removed from the food bolus in the intestines.

Once all this blood comes into contact with each of the liver's cells, it will proceed to remove nutrients, but also to purify the waste it has.

The role of the liver in the purification of blood :

The liver kills microbes and viruses and neutralizes their toxins.

It deactivates toxic materials that have been consumed (food additives, pesticides, drugs, etc.)

It is a cleansing organ.

The liver expels glues thanks to the presence of the bubble, and is therefore specialised in eliminating glues.

The bile ducts collect this bile and store it in the gallbladder, which empties it into the duodenum (upper part of the small intestine) during mealtimes. The intestinal emunctory will take over from these glues afterwards.

The intestines are about 7m long, consisting of the small intestine and the colon.

The small intestine takes care of the absorption of food nutrients, once digested from the stomach.

The nutrients (amino acids, fatty acids, vitamins, sugars, minerals, etc.) arrive in the liver through the portal vein, crossing the intestinal mucosa. Once transformed, the liver releases them into the bloodstream for distribution to the rest of the body.

It should be noted that under normal circumstances, the intestinal mucosa selects and leaves only well-digested molecules in the blood. Toxic residues and large, poorly broken down particles are evacuated with the faeces. However, it is possible that this mucous membrane can change and become permeable. And this permeability is a major factor in body fouling.

Permeability can be caused by food intolerance, inadequate nutrition, chemicals, medicines, stress, etc., basically anything that can cause digestive inflammation.

The final processing of materials takes place in the colon. The local bacteria mainly attack the dietary fibres and the collected nutrients reach the liver via the portal vein.

The rest, i.e. the unusable or undigested residues, become the faecal substances that will leave the body.

It should be noted that constipation is also a cause of organic fouling because the particles are reabsorbed and join the bloodstream to the liver. In order to avoid a large intestinal reabsorption of toxins, the factors that cause constipation must be addressed.

A well-functioning intestine empties 1-2 times a day. If the bowels only empty once every 2 to 3 days, this is a sign of constipation (poor bowel movement).


The lungs help the body to breathe. Air is drawn into the lungs through the alveoli and passes through them back into the bloodstream. Carbon dioxide and other volatile waste products go the opposite way out of the body when exhaled.

The role of the lungs is therefore to purify waste gases, mainly carbon dioxide.

The lungs have cilia in their mucous membrane and this prevents the intrusion of dust during inspiration. They also exclude semi-solid waste such as mucus and sputum, which are also glues caused by eating too much fat, too much sugar, starch (bread, pasta, cereals, etc.) and above all too much.

To facilitate oxygenation, the evacuation of carbon dioxide as well as the glues, it is necessary to do physical exercise.

The particular emunctory for eliminating crystals: the kidneys.

The human body has two kidneys. They are located on either side of the spine below the last ribs.

The kidneys filter the blood and make up the urine after filtration. And the urine consists of 95% water out of 1.5l per day. The rest is waste crystals, i.e. urea, uric acid, creatinine, mineral salts, etc.

After the bladder is formed, it stores the urine until it is expelled during urination.

If the body lacks hydration, the rate of urination is too low, and this will cause pain when crystals are expelled.

This can cause irritation or even injury to the lining of the urinary system. And may even form stones.

It should also be noted that blood filtration by the kidneys depends on the blood pressure mechanism.

Filtration is ideal when the blood pressure is normal.

If there is a drop in blood pressure, filtration is weakened and causes water retention and oedema due to the lack of expulsion of absorbed water.

And if there is a rise in blood pressure, there is an abundance of urine output.

The only mixed emunctory: the skin

The skin is one of the most important organs in the human body. In an adult, the skin represents 1.8 m2 and weighs 4.5 kg.

The epidermis is the part that protects the skin. Skin renewal and repair of lesions takes place in the deep layer, the basal layer.

The removal of adhesives via sebum with the help of the sebaceous glands takes place in the dermis, which is the seat of mixed purification activity. The sweat glands are also specifically designed to remove crystals via sweat.

Sebum is made up of fatty substances and proteinaceous substances which come from the regeneration of the sebaceous glands themselves. And sweat is a mixture of water, sodium chloride, nitrogenous waste (urea, uric acid) comparable with diluted urine.

The hypodermis is the deepest layer of the skin. It consists largely of fat cells.

They store fat for use.

They can also accumulate waste products that mix with this fat, giving rise to cellulite. 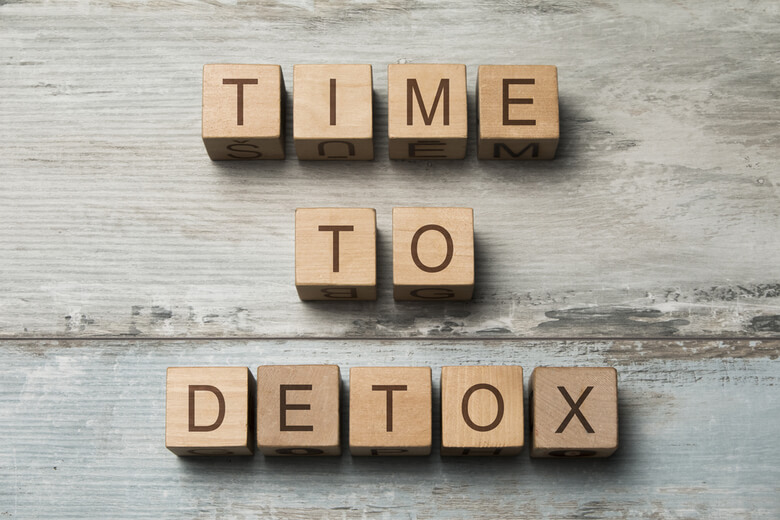